Brooklyn can be a very interesting place to live. It has everything from artisan foods to avant garde art, nude beaches to topless pizza places, historical sites to  the latest trend. It is a borough that seems to have a bit everything and some things you didn’t know you wanted.

This past weekend, I had friend from out of town visiting, so we started with the obvious and went to brunch complete with  chicken and waffles, bloody Marys and cocktails. Afterwards, once we were fortified with liquor, we headed to a  more “Brooklynesque”event called “Beat It”. Beat It was described as “an interactive art installation where viewers are invited to take foam bats and let out their aggression on over-sized stuffed animals and giant pinatas.” 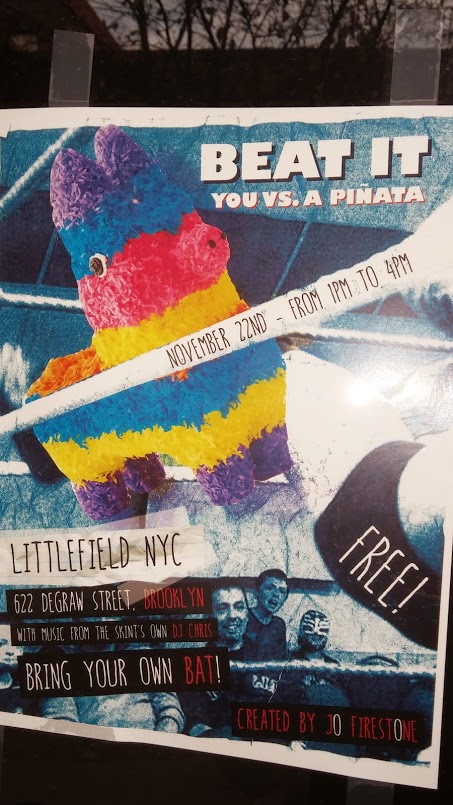 The event was thrown by Jo Firestone, a local figure most famous for hosting Punderdome, a monthly pun telling competition.

As in any organized society, there were rules to the engagement. Though, you’ll note that the poster for the event asks you to bring your own bat, but the rules prohibits use of your own bat or “hitting device”. No one brought their own “hitting devices” as far as I could see, so this miss communication didn’t have any ill effect. 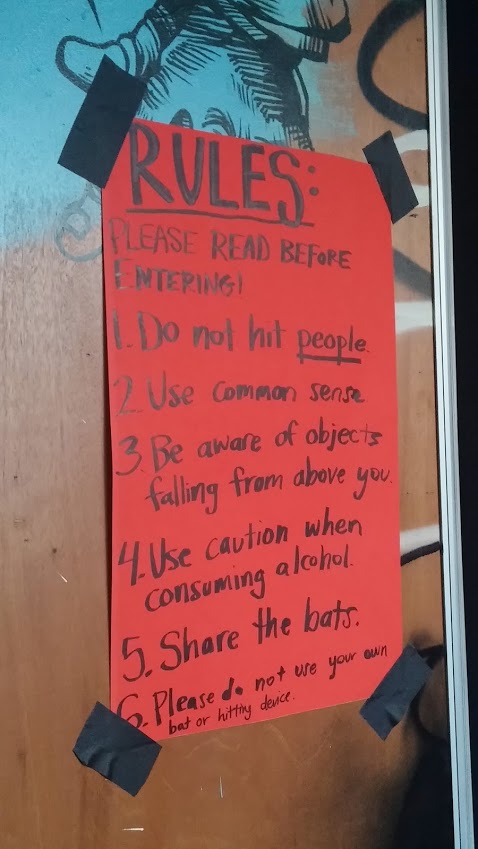 After signing a waiver and questionnaire about what makes us mad, we were handed foam noodles and were invited in to beat various objects to our hearts content.

I have to say there is something delightful about watching fully grown men and women take their aggression out teddy bears and pinatas. Feeling silly and giddy, we stopped to take some silly pictures with the props.

After we battled the toys to our hearts content, we headed to a shuffleboard bar for more cocktails and board games. I’d like to say that it was a unique Brooklyn day, but honestly things like this happen every day in my neighborhood. It may be weird, but I call it home.